You must have seen in Harry Potter movies when some letters gets teared apart and destroyed after the message has been conveyed, but it is no longer fiction as scientist have made special documents that when coated with a special layer of nano-particles would get erased by themselves when read once.

A team at Northwestern University in Evanston, Illinois, coated gold nanoparticles with a layer of hair-like molecules called 4-(11-mercaptoundecanoxy)azobenzene or MUA. When zapped with ultraviolet light, these filaments change their shape and charge distribution, causing the nanoparticles to congregate together and change colour .

The colour of the nanoparticles depends on how close they are to one another,” says lead researcher Bartosz Grzybowski. “For instance, gold nanoparticles are red when separated, but become violet, then blue, then colourless as they cluster together.” 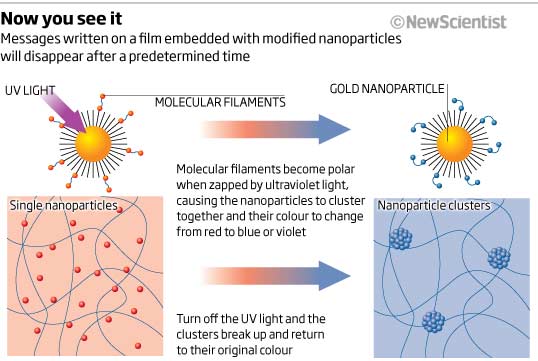 The color change is not forever and in the absence of Ultraviolet Light the MUA goes back to its original shape, allowing the nano-particles to disperse and the content to vanish.The image’s lifetime depends on the amount of MUA coated onto each nanoparticle. By varying this concentration, the chemists found they could control how long the images stayed visible, from hours to days. Exposing the films to intense visible light or mild heat erased the images even faster, in a matter of seconds.Source- Newscientist.com