Mirza was born to a sports journalist Imran Mirza and Nasima in Mumbai. She was brought up in Hyderabad. Mirza began playing tennis at the age of six, turning professional in 2003. She was trained by her father, as well as her other family members and was sponsored by the industrialist GV Krishna Reddy. She went to Nasr school in Hyderabad.And later joined St.Mary’s college for her graduation.

Mirza won the 2003 Wimbledon Championships Girls’ Doubles title, teaming up with Alisa Kleybanova of Russia. Mirza is the highest ranked female tennis player ever from India, with a career high ranking of 27 in singles and 18 in doubles. . She holds the distinction of being the first Indian woman to be seeded in a Grand Slam tennis tournament . Earlier in 2005, she had become the first Indian woman to reach the fourth round of a Grand Slam tournament at the 2005 U.S. Open, defeating Mashona Washington, Maria Elena Camerin and Marion Bartoli. In 2004, she finished runner up at the Asian Tennis Championship. In 2005, Mirza reached the third round of the Australian Open, losing to eventual champion Serena Williams. On February 12, 2005, she became the first Indian woman to win a WTA singles title, defeating Alyona Bondarenko of Ukraine in the Hyderabad Open Finals. As of September 2006, Mirza has notched up three top 10 wins; against Svetlana Kuznetsova, Nadia Petrova and Martina Hingis. At the 2006 Doha Asian Games, Mirza won the silver in the women’s singles category and the gold in the mixed doubles partnering Leander Paes. She was also part of the Indian women’s team that won the silver in the team event. Mirza had the best results of her career during the 2007 summer hardcourt season, finishing eighth in the 2007 U.S. Open Series standings. She reached the final of the Bank of the West Classic and won the doubles event with Shahar Pe’er, and reached the quarterfinals of the Tier 1 Acura Classic. At the 2007 U.S. Open, she reached the third round before losing to Anna Chakvetadze for the third time in recent weeks. She fared much better in the doubles, reaching the quarterfinals in mixed with her partner Mahesh Bhupathi and the quarterfinals in the women’s doubles with Bethanie Mattek, including an impressive win over number two seeds Lisa Raymond and Samantha Stosur. She represented India at the 2008 Summer Olympics in Beijing, in the women’s singles and doubles events. In singles, she retired in the round of 64, while she was trailing 1-6, 1-2 against Iveta Benešová of Czech Republic. She teamed up with Sunitha Rao for the doubles event. They got a walk-over in the round of 32, but lost to Russia’s Svetlana Kuznetsova and Dinara Safina by 4-6, 4-6, in the round of 16. Mirza received an honorary degree of Doctor of Letters from MGR Educational and Research Institute University in Chennai on 2008-12-11.[1]

Sania Mirza at the Hyderabad Open in 2006

Sania Mirza at the 2007 Australian Open, during her first-round womens doubles match 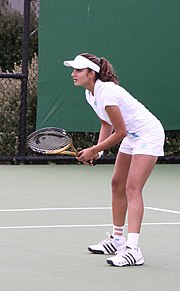 Sania Mirza at the 2007 Australian Open

As a Muslim, she has garnered criticism from some Orthodox Islamic groups, as her attire allegedly did not conform to Islamic dress codes. According to one report published September 8, 2005, an unnamed Islamic scholar had issued a fatwa, saying that her attire is contrary to what is permitted by Islam.[2] A further report published the next day on this fatwa elaborated that Mirza was unfazed by the comments [3] Large numbers of Muslim clerics protested her attire, accusing her of being a “corrupting influence on the youth.”[4] She has been widely attacked and vilified in Islamist circles, including a cleric named Haseeb-ul-hasan Siddiqui who said “The dress she wears on the tennis courts…leaves nothing to the imagination, She will undoubtedly be a corrupting influence.”.[5] Islamist groups such as Jamiat-ulema-e-Hind allegedly threatened to disrupt her tennis matches, following which the Calcutta police had to tighten security measures to protect her.[6] Mirza’s doctor received threatening letters demanding that he cease to treat her since she was dishonoring Islam.[7] Mirza, a Muslim from Banjara Hills, also attracted a response from the Major Shia Organization in India, The All-India Shia Muslim Personal Law Board. The Board disapproved and cancelled the edicts issued by some Muslim clerics on dresses worn by Mirza while playing, and asked them not to meddle in the sports arena. In 2006, some newspapers reported that Mirza declined from playing with an Israeli tennis player Shahar Pe’er for fear of violent protests from India’s Muslim clerics and their opposition to the existence of Israel.[4] However a year later (i.e. in 2007), she teamed up with Pe’er for the 2007 WTA Tour of Stanford, California. Mirza said in January 2008 that she considered quitting the sport because of undue controversy surrounding her actions. Mirza was pictured resting her feet during a press conference at the 2008 Hopman Cup, with an Indian flag in close proximity.[8] She faced possible prosecution under the Prevention of Insults to National Honour Act after a private citizen complained. Mirza protested that, “I love my country, I wouldn’t be playing Hopman Cup otherwise”, and said that she meant no disrespect. On February 4, 2008, Mirza said that she would stop appearing in tennis tournaments held in India, starting with the 2008 Bangalore Open the following month, citing the series of controversies and upon advice by her manager.[9]